Seniors Are Going Online To Talk About Sex, And More Things You Didn’t Know About Grandparents Hooking Up

Home/WELLBEING/Seniors Are Going Online To Talk About Sex, And More Things You Didn’t Know About Grandparents Hooking Up
Previous Next

Seniors Are Going Online To Talk About Sex, And More Things You Didn’t Know About Grandparents Hooking Up 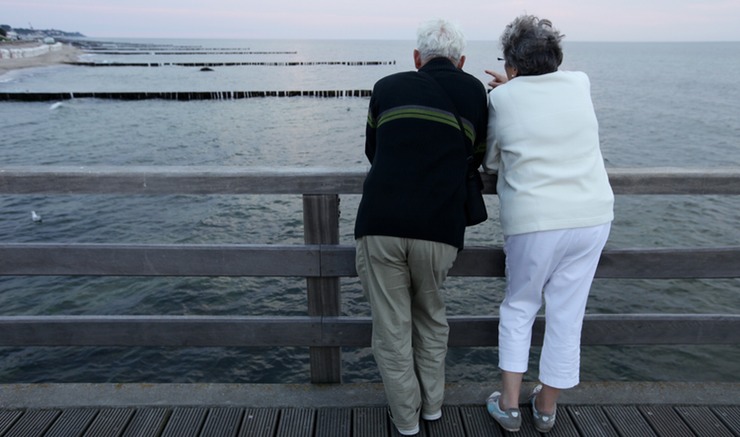 By AMANDA CHATEL
If you think you stop having sex when you get older, you’re very, very wrong. Not only do studies show that sex gets better with age, but new research has confirmed that seniors are using the Internet to talk about sex. Yes, in between all those comments that don’t really make much sense on your Facebook wall, your grandparents are going online to talk about sex with their fellow seniors.
According the study out of the University of Illinois, seniors are really interested in sex and have a “high involvement in sexual activities.” Because this is the case, they’re participating in online communities where they can openly discuss sex with people their own age, as well as share tips. The researchers examined these discussions in 14 online communities, seven of which are based here in the States, and found that a support network was essential for these people, especially in a society that sort of looks at elder sex and gets a wee bit squeamish about it. Being anonymous online allowed these people the freedom to engage in topics ranging from the difficulty discussing sex-related issues with their doctors to sex toys.
Because we’re all going to get older, no matter how much we might not want to, here are five things to know about senior sex and some of their online activities:

1. Far Too Often Even Doctors Dismiss The Sexual Concerns Of Seniors

As the research found, there are three primary issues that seniors discuss online: Circumstances that affect sexuality, not enough access to sexual health information, and having a hard time talking to doctors about their sex life and sexual health. For many seniors, they struggled to not only bring up the topic of sex with their doctor, but were actually dismissed or ignored when they tried to get the conversation started.

2. Seniors Are Down With All Kinds Of Sex

According the research, it was those seniors who were joining these communities who were reporting more “enriched” sex lives because of it. They’re also more able to get over hang-ups and to try things that they may not have considered trying in the past.

4. Seniors Are Very Much Aware Of What Others Think Of Senior Sex

Another positive aspect to come out of these online discussion groups was that seniors could commiserate over the stereotypes we have in a our society about older people having sex. The researchers found that this particular topic was one that came up over and over again, and seemed to be a very popular discussion that’s being had.

5. Most Seniors Believe That Sex Is A Really Important Aspect Of Their Relationship

As is clearly the case since they are going online looking for information about sex, that aforementioned EliteSingles study also found that 93 percent of seniors felt sex was “important” part of their relationship. Also 37 percent of those 70 and older were willing to leave their relationship if they weren’t getting any.
Repost from: BUSTLE
Enhance your sex life with our online course “Hotter Sex Life For The Modern Woman” ”Sex Masterclass For The Modern Man”