Home/WELLBEING/How Joining a Pageant Transformed Me
Previous Next 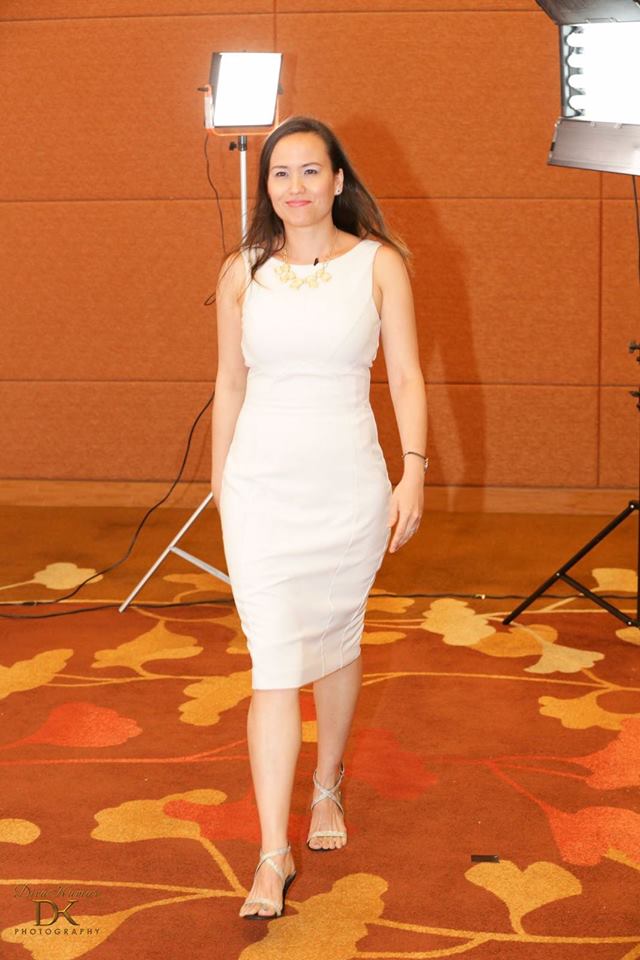 I’ve battled shyness, multiple fears, lack of confidence, poor body image and self-esteem issues since I was a kid.
The Mrs Singapolitan Islandwide 2017/2018 Pageant journey I embarked on was a wild ride with unexpected results.
I think back to the days where the women in my family and I had juicy fun judging the contestants on televised beauty contests while in our comfortable living rooms. Having gone through the pageant, I take my hat off to these women who make it look so easy. They make it look so effortless that a part of me believes that they are born flawlessly beautiful and they don’t feel the same discomfort I feel. The elaborate and heavy national costumes, the falsies and heavy makeup, the catwalking with beautiful posture while in painful high heels, the tight-fitting clothing, the well-toned bodies and the ultra-challenging question and answer segment – all done with poise and a beautiful smile. In my experience, it is challenging to juggle all of that and it really is effortful and time-consuming to look and sound good.
Being clueless about the world of pageantry, I hoped to find helpful instructional videos, like a dummies guide on how to excel. I searched on Netflix and found one pageant documentary entitled “To be a miss”. It sounded promising.  It turned out to be far off from what I was looking for. It was revelatory and disturbing. It showcased Venezuela’s pageant obsession, the multi-billion dollar pageant industry, the exorbitant amount of money contestants needed and the numerous plastic surgeries. One segment was particularly cringe worthy. The judges were calling out the winners for “Best Face” and “Best Body”. The contestants were really young girls, below 10 years of age. I can only imagine the damaging effects on self-image that those type of titles bring upon the “losers”.
The documentary followed the stories of 3 women striving to win titles. One hopeful contestant successfully made it through many rounds but as she failed to raise money from sponsors for her required plastic surgeries, she had to drop out. One young, gorgeous and slim girl sacrificed her social life to work out daily for 3 hours. She felt lousy for she kept on receiving the feedback that she needed to lose more weight. I couldn’t for the life of me fathom the feedback for I didn’t see any excess flab on any part of her body. At the end of her long but unsuccessful journey, she was asked, “Does Miss Venezuela represent the quintessential woman of Venezuela?” She replied thoughtfully, “No, the woman of Venezuela is plain and simple. Miss Venezuela is manufactured.”
The entire pageant journey I was in was documented and featured in 8 reality TV episodes aired on cable TV channels. It began with auditions on the 21st of January and culminated with the finals on the 1st of July. The 14 contestants and I went through a series of workshops including those on acting, catwalk, posing, fitness, skincare, makeup, hairstyling and styling. One surprise element was dancing for an original music video.
We were given the challenge of posting creative shawl styling shots frequently on our social media accounts. I reluctantly started my first instagram account and put up photos of myself with motivational quotes on them. I initially felt uncomfortable putting myself out there that way. When people reacted positively, it gave me a confidence boost. Prior to the live styling contest at the Hilton Hotel, we had little time to prepare.  I’m not a girly girl. My makeup skills are basic. 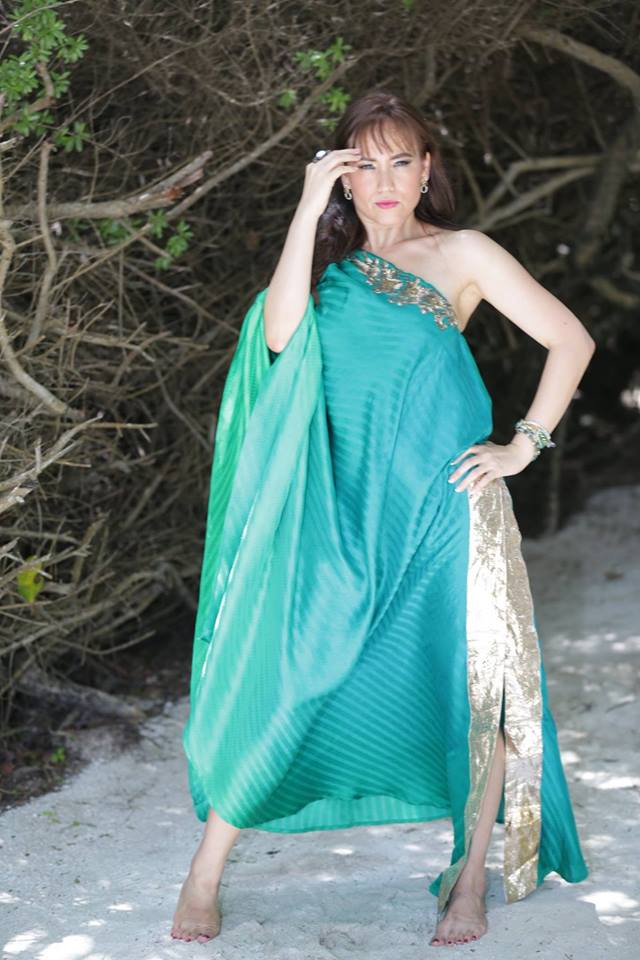 I owned only one pair of high heels and have a simple wardrobe. We were tasked to wear our finest evening wear for this portion of the contest and speak on what our message was as a Pageant Queen in 1 minute. I know there’s a long running joke about women lamenting about having nothing to wear. I truly didn’t. To my relief, my more fashion conscious hubby assisted me and we settled on a sleek, figure-hugging fuscia gown. I worried that the gown was too plain and my hubby reassured me that I could glam it up with accessories and that I did. I chose beautiful yellow orchids for my hair, borrowed a magenta necklace and earrings set and arranged for a makeup artist to do up my hair and makeup.
The 1 minute sharing was nerve wracking.  At the end, I felt a great sense of accomplishment having gone through it – the ideation process, the crafting and refining of the speech till it was under 1 minute, recalling and reciting the speech live, in front of the judges and audience. The skill of being impactful and concise in articulating our messages is so important so I’m glad I flexed those skills. My message was about how the majority of women around the world do not feel beautiful enough and I shared about the importance of stepping up now, embracing ourselves and being good role models. Click to listen to my 1 min message as a Pageant Queen:  http://bit.do/1minmsg

Mid-way, the pageant founder shared that she didn’t see the fire in me to win. I was caught by surprise as I hadn’t aired my feelings. She was right, though. I was uncomfortable with the whole idea of competing. I was feeling like dropping out to let others win. In my line of training work, there is a strong element of collaborative teamwork and I assist everyone in getting better and achieving successes. I had challenges taking the trainer hat off. She highlighted that I only had to help myself, compete with myself and become a better version of myself, without being concerned with the others. To have received a pep talk from her at that juncture made me feel cared for and I did push myself more henceforth.
As I still felt uncomfortable, I arranged for an energy releasing session with a coach in the UK. I recounted a painful memory of being taunted for the bouncing of my comparatively large mammary glands (big boobs) while cheerleading in high school. I shared with her about the unease I felt about standing out, winning and with the possibility that my presence may be making others feel less than. That session was powerful and I felt significantly lighter and calmer after. 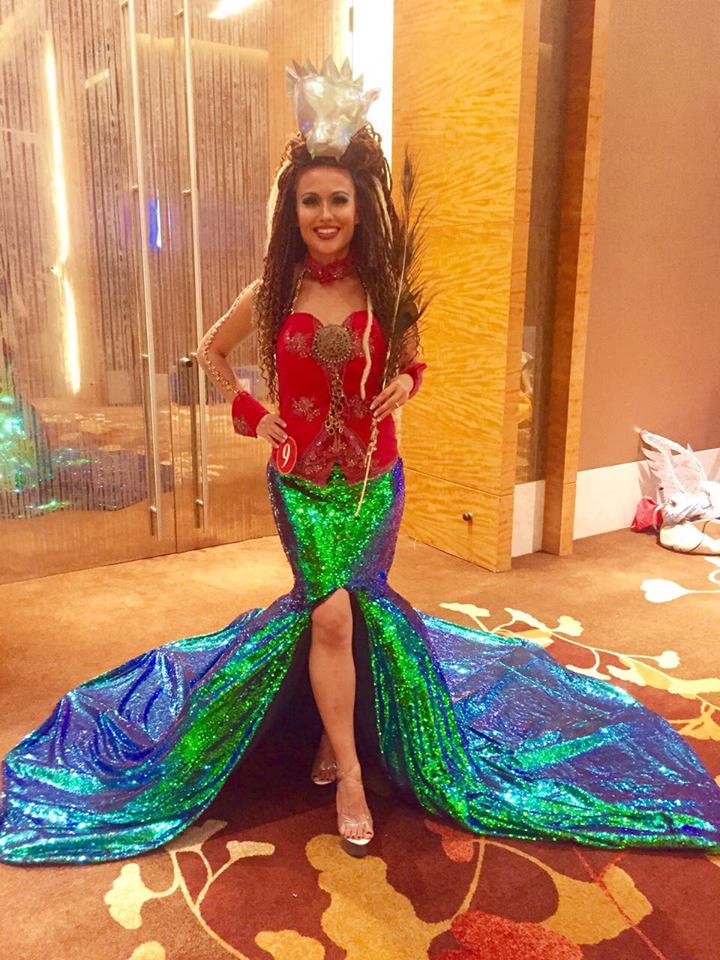 The highlight of the pageant was the official photo shoot that took place on the Makunudu Island Resort in Maldives. While being photographed standing on the windy cliffs and posing against the breathtakingly gorgeous azure sea backdrop, I felt like I was on America’s Next Top Model. It was hard work to juggle getting the right look and pose while managing the outfits, sun’s glare and strong winds. I absolutely adored every minute of it. It is not every day that we get beautiful shots taken of ourselves and I do treasure those shots. I now realize what a big difference photography, backdrop, posing, makeup and hair makes. I think it is a really good idea for every single woman to have some gorgeous photos of herself for keepsake.  Reality TV episode shot in Maldives: http://bit.do/pageantinmaldives

Leading up to the finals, we had dress fittings and rehearsals. One week prior, I really felt the nerves and practiced my catwalk and dance routine religiously so as to ensure I had muscle memory. On the actual day, my dearest family members and friends came to support me and it meant the world. The first segment was our dance in 4 inch heels and we were petrified something would go wrong as the carpet was uneven and we felt wobbly during our rehearsal on the stage itself. I recall telling myself to focus on being rooted to the ground and the dance was a smash. Next came our self-introductions and my hubby surprised me by holding up a big hand crafted sign with my name on it. The last segment was the evening gown segment combined with the dreaded question and answer segment. I am so thrilled to have aced it. It was only possible with tones of rehearsals to sound natural. I walked away with the 1st runner up title, cash and vouchers, many memories, new skills and much more self-love and confidence. 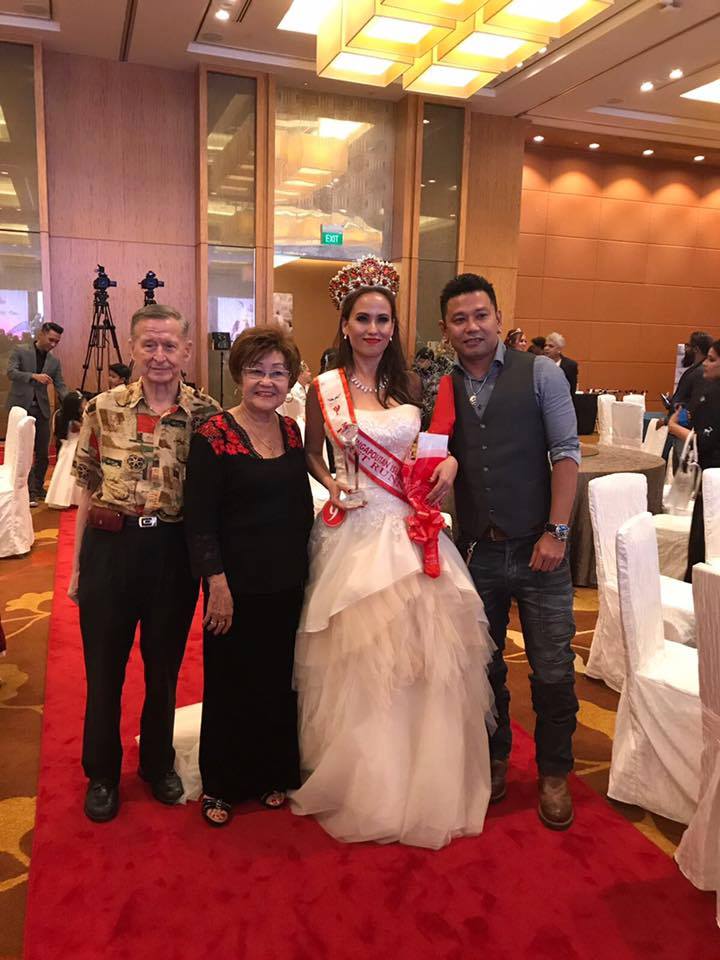 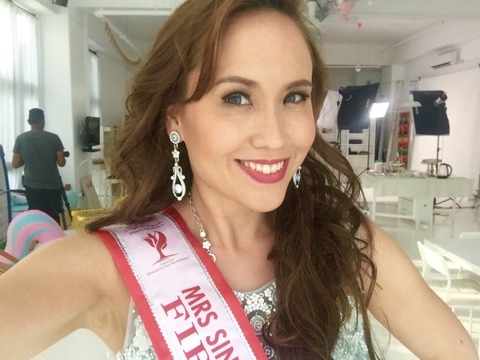 Dianna freelances as a model, actress and host. She derives immense satisfaction in her work as a trainer for the past 15 years, running motivational workshops and overseas eco-conservation based adventure trips for over 13,000 people in Fortune 500 companies, MNCs, government arms and institutions.
She is a health advocate and a fan of juicing, Taoist and Qi gong therapies and clubbing at home.