Home/RELATIONSHIP/Masculine versus Feminine
Previous Next

Today, any talk of “masculine and feminine” invariably attracts a bombardment of heated discussion about “outdated gender roles” or “toxic masculinity”. As an outcome of third and fourth wave feminist movements, there’s much pressure to nullify any associations that can be attributed to gender, and as a result it’s basically become taboo to talk about the innate differences in desires and energies of men and women when it comes to the act of courtship or seduction, lest one be labelled as “supporting oppression”.

However, after coaching men and women in the art of dating over the years, it’s become obvious to me that this pressure has greatly contributed to the frustrations of finding a life partner experienced by both men and women alike, as people are confused about how to conduct themselves “appropriately”, which often seems at odds with what “feels good”, or what we inherently find “attractive”, and ultimately, what works effectively in the dance of seduction and more importantly, in relationships.

Of course, much of this friction comes from socialised judgments such as “masculinity is dangerous” or “femininity is weak”, but the truth is none of these associations are correct—they’re simply extracted from behaviours that aren’t either masculine nor feminine in nature, but that reflect personal insecurities. Masculinity and femininity are merely two poles of a continuum that contain remarkably different, but complementary flavours of energy that, like with magnetic poles, work to attract or repel on a sexual level. Neither has a superior or inferior quality to them. If you still find such words triggering for you, simply replace the words “feminine” and “masculine” with Taoist terms “yin” and “yang”.

It is also important to note that these terms aren’t necessarily associated with gender, and although it is true that most men identify as masculine, and most women identify as feminine, some men and women identify more with the opposite polarity. We often see this in same-sex couplings where one partner takes on a more feminine role and the other a more masculine one. The phenomenon of sexual polarities is also apparent across virtually all sexual animal species.

So why are sexual polarities a thing?

To answer that, we have to look over tens of thousands of years of evolutionary psychology that developed through natural selection, where these opposing polarities became necessary for the survival of the species, and became embedded in our natural psychosexual responses.

Ancient gender roles played a large part in determining what behaviours we find attractive, due to their usefulness in helping us either survive, or replicate our genetic material from one generation to the next. And although these gender roles are no longer necessary in today’s society, our brains are still unconsciously wired to deem certain characteristics in a person as “sexually attractive”. To deny this fact is to doom oneself to continued frustration in the game of courtship.

What is helpful however, is to understand that we all have a mix of both masculine and feminine energies, and that with awareness we can consciously choose when and how to apply these in order to be more fully self-realised, embodied, and happy in life. And ultimately, more attractive to the opposite sex. This is an incredibly empowering reality, as it means that we can exercise more control in our lives and be more in touch with our innate desires.

With incredible pressure for men to be more emotional and less assertive, they inadvertently take on behaviours that aren’t perceived as attractive to most women. Despite wanting to connect deeply intimately and sexually with women, they find themselves being “friendzoned”, or forever treated platonically.

This problem is mirrored by women, who, often working for strongly capitalistic for-profit organisations, find themselves having to “out-men” men in the work environment in order to climb the corporate ladder, and then find themselves being frustrated that they can’t attract the kind of men they truly desire as a result of their behaviours and sensibilities being coloured by their hyper-masculine work environment. In most cases, both men and women are being socialised, even coerced, into changing their behaviours to suit the external environment.

How do Masculinity and Femininity differ?

The Masculine, or Yang, is often described as the “assertive” and generally appears as grounded, centred, future-oriented, efficient, orderly, protective, and logical. The Feminine, or Yin, is often described as the “receptive” and shows up as flowing, chaotic, present-oriented, experiential, nurturing, empathetic, and emotional. The Masculine focuses on end goals and tangible outcomes, while the Feminine enjoys the process and the journey.

By understanding polarities we can also learn how to more effectively connect and emotionally bond with someone by mirroring the same aspects of their polarity. It’s a major reason why we typically have more friends of the same sex as us. But this connecting aspect often comes at the cost of attraction, especially in the sexual context, as sexual charge is created by the subtle friction of opposing polarities, which is why gaining mastery over how to switch polarities can help you create more sexual tension, and thus sexual attraction when appropriate.

What often happens with married couples post childbirth is that as both parents share duties equally the lines between masculine and feminine often become blurred, with both partners defaulting to a point in the middle most of the time. And while there is a deep sense of partnership, sexual tension often wanes due to there not being enough distance between the two polarities. In cases such as this, it becomes very important to consciously make time to exercise the muscles of pulling back into opposing polarities to build more sexual tension into the relationship.

For those who are on the dating scene, it can be a powerful exercise to practice embodying both sides of the polar spectrum in order to feel deeply into what feels most empowering on a sexual level and what feels more deeply like the “real you”. You also gain perspective and empathy towards those who you are looking to attract, helping you understand their needs and desires more fully—for example, have you been deferring decisions during dates to the other person, when what they’re really looking for is for you to step up and lead them more assertively so that they can relax, think less, and feel into the experience? Or conversely, is your tendency to make decisions denying them of the opportunity to take charge and feel like they’re leading the experience?

The Desires of the Masculine and the Feminine

It’s important to understand what each side of the polarity deeply desires in relation to the other and also why confusion and friction occurs that hampers connection. Problems in relationships often occur because we don’t share a common set of desires, and become frustrated that our partner doesn’t understand what feels so inherently obvious to us:

For men, there’s a focus on objective facts, and logical sequence of actions and events, and ultimately looking at outcomes and how they tie back to the big picture, and wanting to efficiently solve any problems that come up, and a certain impatience that things don’t move forward quickly.

For women, there’s a deep need for self-expression and acknowledgment, and an understanding the importance of the journey and not just the end goal; a strong desire to be heard and have their emotional experience understood and acknowledged, rather than having their problems immediately solved. Frustration occurs when such acknowledgment isn’t forthcoming.

So, let’s break down these desires a little more clearly:
Masculine

Carefully considering these desires enables you to cater your attitude and approach to the other’s needs more attentively, whether in an established relationship, or during the courtship process.

The Wheel of Polarity Framework

To describe how the masculine and feminine polarities work together I like to use a diagram I call “The Wheel of Polarity”.

On a piece of paper, draw a circle and a horizontal line through the middle, labelling one side “M” for masculine, and the other “F” for feminine. Next write “Me” at the top, and “Other” at the bottom. It should look something like this: 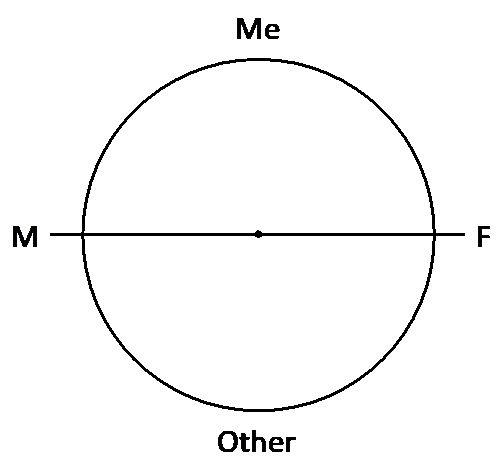 Now, on the bottom curve pick a point that best represents your ideal partner in terms of where they sit on the continuum between masculine and feminine, draw a dot and label it according to percentage masculine to feminine. E.g., 20:80.

Draw a line from that point through the centre to the opposite side of the circle, and label it according to the percentage masculine to feminine. E.g., 80:20. This is your “Attracting Polarity”. From this point you will be most sexually attractive to your ideal partner. This is critical for establishing a sexual charge and for becoming sexually intimate with someone you desire.

Now draw a line from the bottom point directly upwards toward the top curve. This is your “Connecting Polarity”. From this point you will connect most deeply with your ideal partner. This is important for establishing a safe emotional bond with someone, to build trust and to connect on a non-sexual level as well. 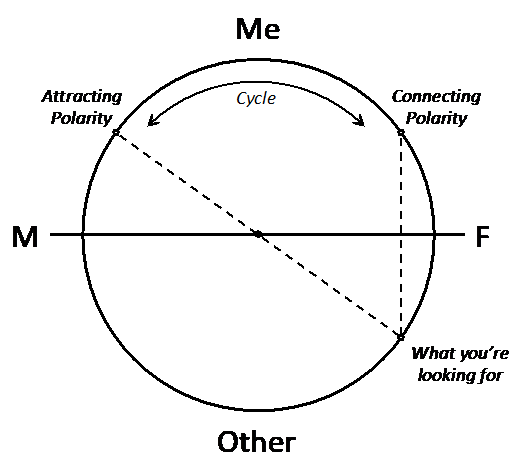 By cycling between the Attracting Polarity and Connecting Polarity you will be able to build both connection and attraction with your ideal partner. This cycling is important as it generates both safety and trust on an emotional level as well as sexual tension, which is critical during seduction and courtship phase of an interaction, and is equally powerful within the context of an established relationship, as it helps maintain a healthy level of sexual attraction between two partners.

I’ve found that the Wheel of Polarity is a very powerful tool for both my male and female clients to analyse and understand how they’ve attracted the wrong partners in the past, and how to adjust their attitudes and behaviours to overcome those challenges in order to successfully attract their ideal long-term partner and to feel more fully embodied in their true nature. 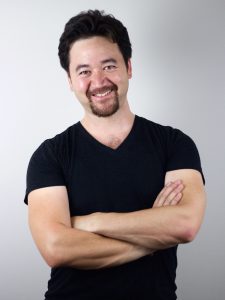 Andrew Mashiko is a Melbourne-based Lifestyle Coach specialising in Dating, Sex & Relationships.
After years of corporate misery and a failed marriage pushed him to the brink of suicide, Andrew embarked on a personal journey to take control of his relationships and his life. Andrew immersed himself in the underground world of pickup artists to improve his success with women, but became disillusioned with the philosophies of a community that led him to little more than one-night flings.
Andrew then embarked on a journey to understand the elusive truth behind real happiness, and discovered that the secret to love and connection lay in embracing a concept he calls “Radical Authenticity”—a philosophy of eliminating your “B.S.” and boldly embracing your true core identity.
Through his coaching organisation Core Magnetism (www.CoreMagnetism.com), Andrew helps men and women achieve romantic success by developing incredible self-awareness and realigning their entire lifestyles so they show up in the world as their most passionate, compelling, and attractive selves.
Andrew has been featured on Channel 7’s The Morning Show, Triple J’s Hack program, SBS Insight, The Daily Telegraph, and The Manly Daily’s dating column Single In Sydney.
Prior to establishing Core Magnetism, Andrew taught Leadership Communication and Leadership Development at the University of California, Berkeley, where he earned his MBA, and holds two law degrees from Kyoto University in Japan.