Home/INTIMACY/SEX/Mastering the Art of Skype Sex
Previous Next 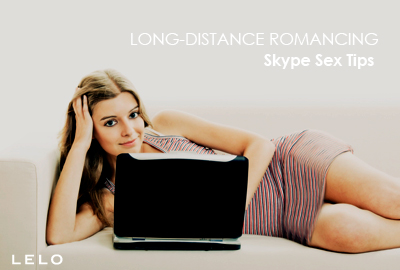 Technology; some claim that it drives us apart and alienates us from each other. But if you’re one of the millions who are currently in a long-distance relationship, technology is all you have to bridge the gap between you and your lover. Lucky for these people, VoP software like Skype exists, and allows you to go the distance in spite of the distance.  And while getting sensual over Skype can feel a little intimidating or unnatural at first, remind yourself that every experimental pursuit takes some getting used to. Keeping this in mind, here are LELO’s top 5 Skype sex secrets:
Out with the Insecurity  The biggest mistake people make while having Skype sex is dampening the mood by letting their insecurity or inexperience show by saying things like, I don’t know what to do or I’m feeling shy. There’s nothing quite as unsexy as a lack of confidence. If you’re feeling bashful or can’t think of anything sexy to say, here’s a hint: say nothing at all, and let your body do the talking.
Play by the Rules
Skype sex is just that—sex. That means that an arousing buildup of foreplay is just as important as it is during physical intercourse. Of course you need to adjust your tantalizing techniques accordingly (more on that later), but don’t make the experience seem unnatural or chore-like by saying things like Should we start now?  Enjoy a glass of wine together, ask about one another’s day, and fan the flames of desire with a simple physical compliment.
Keep it Real
While no substitute for the real thing, you might surprise yourself with how intense a session of Skype sex could be with a little creativity. Introduce a vibrator to your cyber session and supply him with an arousing visual while you experience some more-than-arousing sensations. Be sure to also use your vibrator to experiment with point-of-view positions and angles and communicate with one another to establish a mutual rhythm and pace.
Know Your Role
Since Skype sex stimulates your imagination, why not take advantage of the opportunity to further explore some role-playing fantasies and fetishes? Before initiating a Skype call you intend to turn frisky, slip on a sexy role play outfit (e.g.—maid or nurse) your man has previously revealed fantasizing about underneath your pajamas or normal day wear. When the timing’s right, slowly reveal your outfit and apologize you can’t be there to pick his jaw up off the floor.
Redefine ‘Homecoming’
Since it’s inevitable that you’ll see one another again, plant a seed of sensual anticipation in his mind that will sprout until your eventual reunion. During Skype sex foreplay, let him know that there’s something else also longing for his arrival. Surprise him by visually introducing him to a remote-controlled couples’ bullet vibrator. Able to be used at a distance of over 100 feet, couples’ bullet vibrators offer an enticing alternative to ‘long-distance’ love-making that leaves nothing to the imagination.
While you may be unable to make a physical connection while your partner is away, Skype has shown us that an internet connection provides a kinkier-than-expected alternative to sex while awaiting the return to a lover’s arms.